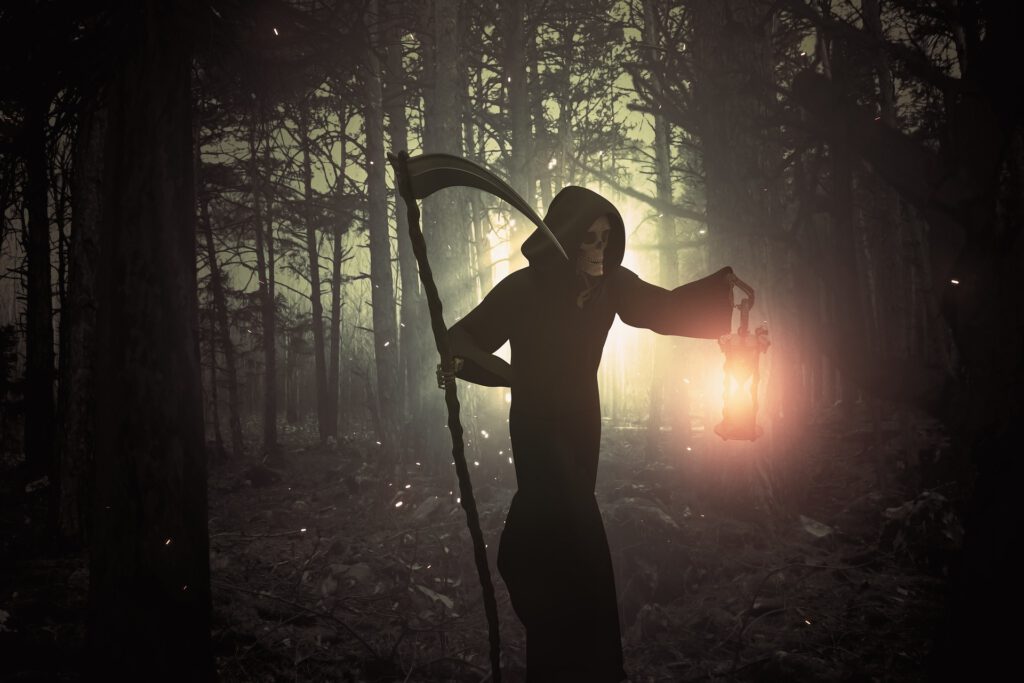 A sigh escaped my lips as I settled down in the old armchair and pulled the heavy floral-patterned blanket over my body. Every Sunday morning, I get very sleepy. Nowadays, I could blame it on my old age; that my aching bones needed to rest before watching my grandchildren the following day. But it has been like that for a long, long time.

The first time he took her, he had intended to keep her, as he always did. He could still remember it vividly, the small flat he had been called to. An overwhelmingly strong smell of mould, alcohol and cold smoke in the air; shabby pink wallpaper peeling from the wall, and her small frame on a lumpy old couch.

He had expected her to welcome his numbing embrace, as so many in her situation had done before. But she never did. She fought tooth and nail, until he agreed on a gamble for her life.

You see, when you are immortal, you have a lot of time to practise, and many before her had pleaded him to give them another chance. Sometimes he gave in, a short break from the monotony that cursed his existence. No one had ever won against him anyway. But she had won the game.

And so he returned the gift of life, brought her spirit back to the flat her body had remained in, before anyone could notice her temporary demise. He would visit many times in the future, not only on their appointed days, no, he would watch over her whenever his duties allowed it.

A noise caused my heavy eyelids to flutter open, revealing my cloudy eyes. It became harder for me to see lately, a most unwelcome sign of my age. I heard children rumbling outside and identified the noise as a ball hitting the garage door. Maybe I should have got up and disrupted their rowdy game, but I was tired; far too tired to get up and walk outside.

Instead, I pulled the comforter closer to my chest, and let my eyes wander over the photos on the wall. Most of them showed my only child, Barbara. One in particular caught my eye, the only picture I had of my daughter as a baby, and the only one left of her father. Although his face had been cut out, and replaced by a newspaper photo of Gary Cooper many years ago, I could still remember the face that used to fill the gap.

My late husband had been a scoundrel, and not a very charming one at that. But it hadn’t always been like that. He had been a good man when I met him, before the war. I had waited for him to return, eager to finally be his bride. But before the ink on the certificate had dried, he had already been drinking away all our money and looking after the young girls in town. After Barbara’s birth, the abuse turned physical.

Death could feel the rage boiling inside his bones at her thoughts, having slipped inside her house before the noise of the children pulled her away from his grasp. So many times he had come to take her, finding her skin purple and broken… She had blamed herself, at first. Until he showed her the harsh truth of his profession, confronting her with the many women he had seen still blaming themselves as he led their spirits away from their broken shells. But not even that had been enough to convince her to leave her husband behind.

And then, one faithful day, he was called to her home again. It was a rainy Tuesday in March. Death remembered it well, her body lying on the cold kitchen floor, a puddle of her own blood around her. Broken and bruised, her young daughter clutching her lifeless body. And he could not bear to take her with him. It was too early. He would not leave her daughter alone with this terrible man. A man whose hands were far bloodier than his own. A man like his own father once was, when he was still mortal. But a bargain had to be struck though, a life is a life. And he could not return to his master with empty hands.

I could feel a peaceful expression coming over my face as I thought about the day George had not come home. The sound of the doorbell had caused me to panic, my own injuries preventing me from having dinner ready in time. But it had not been my husband who stood in front of the door. It had been a policeman, nervously twisting his hat in his hands while telling me that George had been found lying in a ditch next to the road; strange wounds riddling his corpse. “This was no knife, Ma’am. I ain’t ever seen wounds like that” he had said.

Death waited for her to get comfortable before he approached the chair she sat in, taking her into his arms and kissing her forehead, allowing her spirit to come with him. An action so familiar to him, yet he was always anxious. Anxious that one day she would not recognize him, that one day the spell would not work, and she would not remember the many Sundays they have shared. That one day, she would look at him in terror and fear.

Instead, her face lit up upon seeing his form. He could feel her arms wrapping around him, welcoming him back in her home and offering him a place on her table. She had done so many times before, he remembered every single one of them, even though she would not remember that until the next time he took her.

As always, they spent the day talking. He told her about his week, about the old lady who had already waited for him and scolded him for being late. About the young man who followed him after collapsing in the midst of his family, albeit reluctantly. And the dog who growled when he came to take the child she was watching over, who had his leg in her strong jaws as he was leaning over the little bed; eventually persuading him to take her instead.

She told him about her week in turn and the same stories he heard so many times before and that he couldn’t get enough of, not wanting the day to end.

As sunset approached, she stood up and slowly walked over to her armchair, where her body still rested. She waited for him to follow her and bring her back to life, as he always had. Carefully taking her hand, while resting the other on her cold forehead, he began mumbling the ancient words to bring her back to life. He stepped back to watch her spirit fade back into her body, back to its rightful place.

She would not remember their meeting when she awoke, that he knew, yet he always stayed behind to watch over her a little longer, taking in the last rays of sunshine on her face before she woke up to make supper.

“Until next week, old friend.”