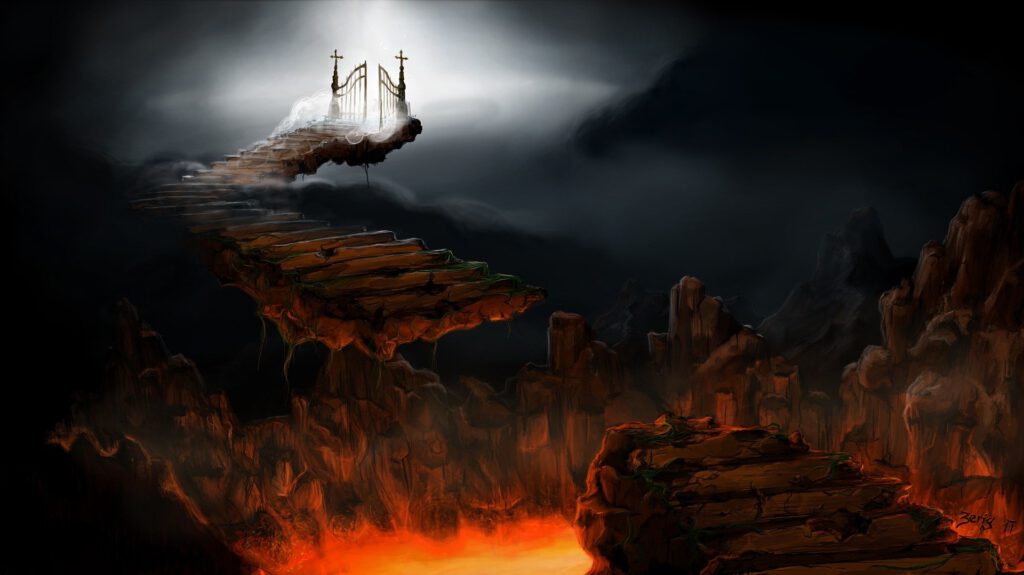 Swallowing dry, my gaze shifted around the room. It was everything but what I expected. Vaguely yellow wallpaper lined the walls, a bulky filing cabinet to my right; the walls riddled with postcards and hastily cut out magazine pages, a calendar stuck on July 1973. Didn’t Pastor Jones always talk about grand stairways, harp music and pearly gates?
I couldn’t imagine a place more different to his description than wherever I ended up going after my… untimely demise. My eyes fell on an enormous desk in the middle of the room; riddled with yellowed paper scraps, coffee rings and stray paper-clips. At this desk sat a figure, almost as absurd as the place itself.

When Pastor Jones talked about Saint Peter, I had always imagined an authoritative, imposing figure, an old man in long white robes, holding a big book and the keys to heaven. Turns out, both Pastor Jones and I were wrong about that. The man sitting behind the desk was slim, vaguely middle aged, and the vividly coloured Hawaiian shirt open just enough to reveal a thick wad of chest hair was far less imposing than long white robes would have been. The onset of male pattern baldness didn’t help with the authoritative look. But above all, Saint Peter looked tired.

“Are you gonna sit down sometime this century? Also, I hate being called Saint Peter; just call me Pete, dude.”

His voice surprised me. I awkwardly shuffled around the room and sat down on the squeaky brown chair in front of his desk. He took off his glasses and rubbed the bridge of his nose. “Finally, took you forever. Most mortals are quicker than you; but you were never a particularly quick specimen, so I don’t know what I was expecting there.”
I cleared my throat, ready to voice my protest, when Sain-, no, Pete raised his hands “Come on man, you know you weren’t. Took you forever to finally go after Jen, and being slow is the only reason you’re here, you should have really got that checked out sooner.” Ouch. He wasn’t wrong though. Jen had bothered me about going for a check-up for years; and when I finally gathered the courage to go, it had been terminal.

“So anyway, what’s the plan now?” His question caught me off guard. “What do you mean, what’s the plan now? Why do you ask me? I thought you are the one making the decisions here?” My voice sounded strange, unfamiliar. It had been a while since I could speak without any restrictions. Pete laughed.
“No no, that’s a choice nowadays. So where do you wanna go, heaven or hell?” My eyes nearly bulged out of my head upon hearing that. “Wait, you’re giving me a choice to go to hell? Why would anyone ever choose that?! Nobody wants to go to hell.”

Pete laughed; not a genuine laugh, but the kind of clumsy laughter laughed when you are on a family hike, and you just stumbled over a possum that died halfway through eating a peanut butter and ketchup sandwich and you try not to make the kids freak out even more.
He adjusted the nickel frame glasses on his nose, before speaking again. “Well, I guess an explanation is needed. So much for my lunch break. So, I bet your church or whatever you went to told you about the old definition of hell? Fiery depths, eternal suffering and torture, demons and the devil, Lucifer or however your folks call him?” I nodded along, and he sighed.
Expecting him to continue, I leaned forward, eager to hear more. Instead, Pete reached into the upper drawer and pulled out an ashtray made from brown glass, a plastic lighter and a pack of Kentucky’s Best cigarettes. I watched him light one and take a couple drags before he continued. “Well, there was a catch with that – people only went to hell as long as they truly believed in it. Eventually, they stopped. You know how it went, started with good old Martin back in the day, and before you know it, the only people who call up demons are 13 year old girls on sleepovers. Hell just went out of business. Was a real crisis back in the day; you can’t imagine the masses of demons; suddenly jobless one day to the other.” He lit another cigarette, the smell of smoke filling the room.

“But you know how it is, that much unused space is terrible for business; plus it got mighty full up in heaven, because of course people still believed in that. So the boss and I decided to rebrand the whole thing.” Upon saying that, he shoved two brochures into my hands. Heavenly Guide and Travel Guide to Hell. I flipped through them, not paying much attention to anything but the grainy pictures. When were those brochures made?

“My nephew Steve made them, back in 1998. Aren’t they adorable? The boss told him to do a computer course; keep up with the mortals.” I nodded along, putting them back on the table. Pete rolled his eyes.

“So, what’s with the rebrand?” I asked, despite knowing now that Pete could read minds. “And I thought hell is where you pay for sins. What about those?” He laughed. “Oh dear. Sins don’t exist, not in that concept. Those are guidelines to keep you mortals in check – you know, it’s an awful lot of paperwork up here if you mess up, and everybody’s been working overtime for the past 2000 or so years. The threat of eternal torture eased the workload for a good few centuries. But – speaking about the rebranding: Heaven and hell are, conceptually, very similar. Imagine it as a giant, all-inclusive, holiday resort. Now, all that is really different is the kind of holiday.”

I perked up, eager to hear more. Pete grinned, and grabbed the brochures again. “Now heaven – imagine giant golf courses, as much apple juice as you can drink and daily arts and crafts festivals.” His fingers glide over the vast list of available activities, perfect for a day out with your family. “And hell; well, it’s warm; we made use of the original temperature, so to speak, but toned it down a little for comfort. There are bonfire parties every evening with marshmallows on us, an unlimited bar, the climate has been proven to be perfect for growing weed. Various concerts, and occasional orgies.” He rambled over a long list of activities. Jen would have blushed.

I interrupted him. “What about reincarnation? Can I go back, try again? I promise to go to check-ups early this time!” The grin left Pete’s face. “I’m afraid you had the wrong subscription for that, buddy – I think you call it religion down there? You got the wrong branch manager. No reincarnation here, only heaven or hell. And you gotta make a choice quickly, the next appointment starts in 2 minutes and 17 seconds, y’all die quickly, and I already spent my lunch break on you. So, which one are you gonna take?” With these words, Pete held out two tickets to me…